Regular colony counts are part of the day-to-day tasks of many laboratories in order to rule out the contamination of products with bacteria, viruses, yeasts, or molds during production. To do this, Petri dishes containing the relevant samples are evaluated in order to determine the number of colonies formed.

While the classic manual counting method means that every single colony has to be marked individually, automatic devices can analyze numerous Petri dishes of the same type very quickly. However, this requires time-consuming programming and preparation that may not be feasible if there is a small number of samples amounting to just a few Petri dishes a day.

In hygiene management and quality control, the total bacterial count is one of the most important parameters. It states how many micro-organisms are contained within a sample. Depending on the type of micro-organism, there are limits that may not be exceeded in order to protect consumers from diseases such as food poisoning.

As a result, samples are routinely cultured on Petri dishes in order to be able to determine the micro-organism concentration after a certain period via a colony count. Older devices in particular, however, that required the counting of every colony individually using a light table and microscope, made this task a time-consuming ordeal.

A Petri dish like this, if it is processed at the right dilution, has between 150 and 200 colonies, if they have to be counted manually, the person counting has to maintain their concentration and mark each colony individually. A routine task can quickly become a time-consuming endeavor. The previous method for colony counting also does not allow for the markings to be changed, which increases the risk of some colonies being counted twice.

Automatic devices are more reliable but they are generally designed to handle larger batches and require a certain amount of effort to be invested beforehand. As a result of their complexity, such systems are a major financial investment. On the other hand, time-consuming preparations are necessary in order to program them because colony diameters or maximum/minimum contrast must be defined prior to automatic operation.

The ColonyStar automatic from Funke-Gerber, however, has been developed so that the device significantly accelerates manual counting with a semi-automatic counting mode. In order to mark 200 colonies, for example, only between four and 15 actions are necessary. The device operator retains complete control and does not have to rely solely on the device, as is the case with fully automatic solutions. In addition to this assist mode, the system can still be trained to identify selected colonies so that fully automatic colony counts can be conducted on predefined samples.

With the ColonyStar assist mode,
marking colonies can be done in
a fraction of the time it would
usually take.

The device is optimized for day-to-day laboratory work and comprises a base station and a detachable tablet. The device houses the camera, the illumination unit and the sample holder. The sample can be marked and analyzed via the tablet and the recognition software installed on it. After pressing the "Start" button, the high-resolution camera creates an image of the Petri dish and sends it to the tablet wirelessly via Wi-Fi.

Individual colonies can be marked by tapping on them on the screen with your finger or a touchscreen stylus. In the assist mode, other colonies of the same type are now identified, marked, and counted. Colonies are considered to be the same type if they correspond to the color, contrast, size, and shape of the selection made by the operator.

This is made possible by a special algorithm, used in conjunction with the high-resolution camera image. In this way, the device can assist the operator, making colony counts much easier. In doing so, the marking of a colony that is not clearly defined or recognizable can be removed or corrected at any time before the final count is saved as an image file.

Additionally, the device features a fully automatic counting mode. The system can also be trained to recognize certain strains of bacteria and agar media. To do this, you can analyze ten to 15 Petri dishes containing the same species on the same agar media and then, after the learning phase, save it as a profile, such as Salmonella or yeast. 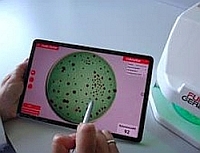 Individual colonies can be marked
by tapping on them on the screen.
In the assist mode, other colonies
of the same type are now
identified, marked, and counted.

Colonies of the same type that match these can then be analyzed fully automatically. The Petri dish is placed on the scanner and after the operator presses "Start", it displays the relevant number of colonies. Unlike purely fully automatic devices, no extensive catalog of questions needs to be processed first because the device learns automatically while counting.

The intelligent, intuitive system is suitable for all Petri dishes up to a maximum diameter of 9.5 cm (3.7 inches) and can be used in all microbiology laboratories, such as in the food industry, but also in medicine, research, veterinary medicine, or in public administrative bodies, such as environmental authorities. The reproducibility is very high at 97% if the operator correctly identifies the relevant colony on the touchscreen once and has correctly saved the profile in the computer. 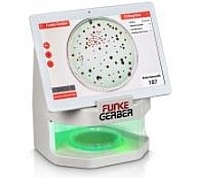 The optional zoom function simplifies the selection of very small or less distinct cultures. Further optimizations, for example with regard to its integration into existing laboratory facilities, are feasible. The first upgrade is expected in the near future and will offer the possibility to port the measurements including the image files as tables in a PDF via USB cable to other devices.