Past, present and future of coliphages - how have these non-pathogenic viruses evolved to become the new water quality indicators?

More than 80 years ago, the scientific community began to consider coliphages as possible indicators of viral and faecal contamination of water. This article summarises more than forty years of experience presented by Professors Charles Gerba (University of Arizona), Mark Sobsey (University of North Caroline) and Juan Jofre (University of Barcelona) at the seminar organised by the Bluephage team on 21 April 2022. 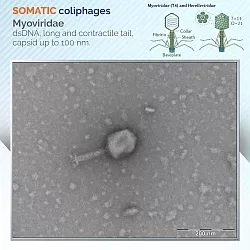 For decades, the scientific community has shown how pathogenic viruses are, in general, more resistant than bacteria, both to environmental factors and to the regular water treatments. They are also more dangerous because their infective dose is lower than that of bacteria, i.e. they can generate infections with much lower initial concentrations. Therefore, a proper assessment of drinking water quality must include viral indicators to ensure that the purification process is effective against both bacteria and viruses.

The most frequent biological contamination of water comes from sewage contaminated with human or animal excreta, which may contain not only pathogenic enteric bacteria such as Salmonella, Campylobacter, Shigella, enterotoxigenic E. coli strains, etc., but also pathogenic viruses such as hepatitis A virus, rotavirus, enterovirus, adenovirus or norovirus, which can cause out-breaks of acute gastroenteritis, infectious hepatitis and other diseases.

Viral outbreaks generated by the use of bacteriologically safe water are relatively frequent, because the regulations traditionally only contained bacterial parameters. To avoid these risky situations, the best option is to include viral indicators to complete microbiological analyses.

Therefore, the three panellists agreed that coliphages are excellent viral indicators of faecal contamination and they debated about regulations and guidelines, methodological aspects, existing and future analysis solutions, as well as the need of improving current laboratory practices.

From 1960s to 1980s: Coliphages began to be identified as possible indicators of water quality and detection methods were developed.

Consensus in the scientific community came in the late 1960s and especially in the early 1970s, when it became evident that bacterial indicators were not useful for predicting the presence of viruses. Therefore, the idea of searching for viral indicators, was put forward for this purpose.

Since human enteric viruses and bacteriophages can survive after wastewater treatment better than other indicators of faecal contamination and pathogenic bacteria, thus warning of the possible presence of other less prevalent pathogens, scientists started to develop detection methods for these parameters. Culturing of, mainly, enteroviruses as pathogenic viruses and coliphages (bacteriophages infecting E. coli and related strains) as indicators were proposed.

However, culture methods to detect the human enteric viruses are usually slow, complex and hardly feasible in routine laboratories, even nowadays, non-feasible for many of them.

In this context, in the 1980s, some host strains were set to detect coliphages and concentration methods for samples with low contamination levels were also developed. From then until nowadays, a very considerable amount of data about coliphages in water, sludge and food matrices has been generated, as well as information about their persistence in the environment and their resistance to treatment processes.

How have coliphage detection methods evolved over the years?

In the 1990s, strains and media were standardized, and inter-laboratory work and quality controls were implemented. ISO and U.S. EPA established their own standard methods, differing between them in sample volume, type of culturing assay and bacterial host strains used, mainly. In addition, molecular methods such as PCR appeared, which boosted the direct detection of the different human viruses of interest in waters. However, although PCR is highly sensitive detecting and quantifying viruses, this method fails giving results about their infectivity, being this a key information in water quality assessment. What is more, from the practical point of view of laboratories, it is not possible to routinely detect each pathogenic virus present in samples.

In contrast, following standard methodologies, the easy and cheap detection and quantification of infectious coliphages in environmental samples is possible. These methods are based on generating a zone of cell destruction (plaque) in a lawn of the suitable host bacteria. Since each of the plaques has been produced by a single coliphage, the results, analogous to what happens with bacterial colonies, are given in PFU (Plaque Forming Units). Presence/absence tests are also described, and they can easily be adapted to a MPN (Most Probable Number) method. 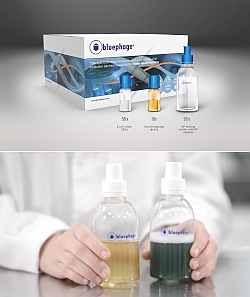 When considering an analysis for coliphage detection and quantification, the first question to ask is the degree of contamination expected in the sample. Normally, if it is wastewater, river samples with high anthropic pressure or sewage sludge, the levels of coliphages will be high enough to dilute the sample and analyse 1 mL of the most appropriate dilutions. In contrast, when dealing with drinking, recreational or reclaimed water, direct analysis of at least 100 mL aliquots will be necessary, since the expected concentrations are low.

On the other hand, solid samples, such as sediments, biosolids and shellfish, require prior extraction using buffered solutions and mechanical means such as agitation to detach the coliphages from the solid particles and transfer them to a liquid matrix for analysis. Finally, samples with a high bacterial load must be previously decontaminated by low protein adsorption filtration to avoid interference with the host strains used to detect coliphages.

The ISO 10705-1 and 10705-2 methods are suitable for analysis of highly contaminated samples and use the DAL (Double Agar Layer) assay for the quantification of F-specific and somatic coliphages in 1-ml samples. Bacterial host strains are E. coli C and E. coli WG5 for somatic, being Salmonella enterica serovar Typhimurim WG49 for F-specific coliphages. The ISO 10705-3 standard describes methodologies for concentrating low contaminated samples which, after that, are ready for DAL coliphage analysis; the recommended methods are adsorption-elution with electropositive filters, membrane filtration through acetate-nitrate cellulose ester membrane filters and flocculation with magnesium hydroxide.

At the same time, the U.S. EPA 1643 method is a SAL (Single Agar Layer) assay for quantifying the two coliphage groups in 100-ml samples, while method 1642 is adequate for concentrating 2-L samples by dead-end ultrafiltration (UF). The host strains described are E. coli CN-13 for somatic coliphages and E. coli HS for F-specific.

On the other hand, although not standardized, the host strain E. coli CB390 was developed by the researchers to detect total coliphages (somatic and F-specific simultaneously). This strategy implies a reduction in analysis costs when both groups need to be detected.

Altogether leads to a scene in which reliable results can be easily obtained by water industry laboratories. However, proper training is needed for analysts and the generation of strains stocks (host bacteria and reference coliphages) requires intense quality controls.

In addition, there is a bottleneck in translating scientific knowledge into specific directives and regulations that include coliphage analysis. This process is always slower than experts would like, and this is probably due to all the factors that ultimately influence the approval of directives (social, economic, public and private interests, etc.). It is at this point that consensus is difficult to obtain.

Nevertheless, in the last decade, coliphages are finally getting the deserved attention and they are increasingly being included in water, biosolids and shellfish regulations and guidelines worldwide, reaching at these moments the number of twenty-seven.

In the current context of climatic crisis, growing of large urban agglomerations, globalisation and aging of water management infrastructures, emerging pathogens begin to play an important role in our society. The need for water reuse raises, as well, the probability of viral outbreaks that pose a real health risk. Assuring proper water quality requires the implementation of the existing means and, for this, coliphages could be considered as an excellent complementary tool.

The need for rapid tests giving results within one working day is other aspect that deserves consideration and, for this, some new detection methods for coliphages have been presented in the last years. Those based on the detection of enzymes released when host bacteria are lysed by coliphages have proven to be particularly useful.

The Bluephage method is based on the detection of β-glucuronidase in hosts in which the genes coding for glucuronic acid transport within the cells have been deleted, and the β-glucuronidase enzyme is overexpressed. The enzyme released by phage lysis is detected by a chromogen that changes from yellow to blue after cleavage. Bluephage is developing user-friendly kits for the presence-absence and quantitative analysis of somatic and F-specific coliphages and they provide results after 6 hours.

The applications identified during the webinar and discussed by the panellists were water, biosolids, food quality monitoring and evaluation of treatment processes. These monitoring needs include drinking waters, bathing waters, reclaimed waters for different uses, shellfish growing waters and treated waters released in sensitive aquatic environments. For many of these applications, obtaining results during the working day is an added value of great interest.

Recognized users are water agencies, water management companies, local authorities, and even private individuals to assess the water quality of their own wells or private domestic supplies. The panellist also pointed out the need of rapid detection and quantification methods suitable for coliphage analysis in sample aliquots of up to 100 ml or even 1 L in order to comply with new regulations for reclaimed and drinking water. Finally, they focused on the necessity of adequate training for analysts and laboratories devoted to coliphage analyses.