This year's Confocal Raman Imaging Symposium, held online, achieved a new level of engagement with a record number of participants from around the world. Over 500 registrants signed up to view and discuss a field of 55 posters grouped under the topics: Advanced Materials Analysis; Environmental and Geo Science; and Life Sciences, Biomedical and Pharma Research.

Attendees were treated to five featured talks presented by esteemed researchers, everyone was encouraged to offer ratings that were compiled to determine the winner of the 2021 Best Poster Award, and more than 80 researchers registered to take part in virtual equipment demonstration sessions.

During the one-week virtual Symposium, participants were invited to explore the conference platform and on-demand oral presentations. A good starting point was the thorough introduction to Raman spectroscopy and microscopy provided by Prof. Sebastian Schlücker (University of Duisburg-Essen, Essen, Germany). 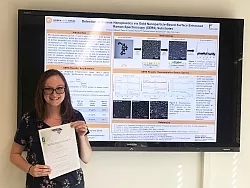 Along with the featured speakers, the 55 contributed posters provided a wealth of scientific content. In the end, one poster received the highest rating from fellow attendees and that honor belongs to Jessica Caldwell from the Adolphe Merkle Institute at the University of Fribourg, Switzerland.

She won the Best Poster Award for her contribution: Detection of Various Nanoplastics via Gold Nanoparticle-Based Surface Enhanced Raman Spectroscopy (SERS) Substrates. Together with Patricia Taladriz-Blanco, Barbara Rothen-Rutishauser and Alke Petri-Fink, she explored one of the most resonant topics in contemporary science: the detection of micro- and nanoplastic particles.

Equipment demonstrations had previously been offered onsite in our laboratories on the final day of the Symposium. This year morning and afternoon sessions were hosted online every day of the conference to accommodate over 80 registrants. WITec application scientists showed the instruments in action with demos of confocal Raman imaging, Raman-AFM, topographic Raman imaging, and Raman-based particle analysis coupled to a spectral database.

The 17th Confocal Raman Imaging Symposium flourished in its transition to a virtual event. Given recent disruptions, it was reassuring to see the spectroscopic imaging community persist in convening to share, discuss and celebrate new techniques and discoveries. We look forward to seeing everyone in person again when possible.