N,N-dimethylformamide dialkylacetals are very powerful derivatization reagents. The most known member of this group is N,N-dimethylformamide dimethylacetal or shortly DMF-DMA. We tried to use this compound to derivatize perfluorooctanoic acid (PFOA) and form an ester. However, our research showed, that the ester is only a by-product of this reaction.

For the structure investigation of the unknown main product, several mass spectrometry techniques were used, e.g. electron ionization (EI), electrospray ionization (ESI) and direct analysis in real time (DART). We found out, that PFOA forms a salt with DMF-DMA in organic solvent. Moreover, inside the injection block of a gas chromatograph (GC), the salt undergoes a further reaction by loss of CO2.

The main product of the derivatization found in GC-MS chromatogram was 1,1-perfluorooctane-(N,N,N,N-tetramethyl)-diamine. Detailed investigation of the reaction products using mass spectrometry was described in our previous publication [1]. In this mini review, the key results of this research are presented.

Currently, liquid chromatography system coupled with mass spectrometry (LC-MS/MS) is the most applied technique for PFCAs analysis. However, several gas chromatographic methods have already been published. Among them, the most common are esterification [3], silylation [4] and formation of anilides [5]. The most important advantages of GC-MS analysis are: high resolution, extensive spectral library, low cost of the analysis and relatively simple method development [6].

DMF-DMA is a well-known alkylating agent that is available on the market under the name Methyl-8® as a solution in pyridine. This compound has both an electrophilic and a nucleophilic site in its structure and is therefore very reactive. The carbon atom is bonded to three electron-withdrawing groups (two methoxy and one dimethylamino group), which forms the electrophilic site. The nitrogen atom is bonded to two methyl groups and one carbon atom and carries a lone pair of electrons [7]. We studied the reactions of N,N-dimethylformamide dialkylacetals with perfluorcarboxylic acids in order to develop a simple derivatization method for PFCA in organic extracts. The formation of methyl esters of PFCA with DMF-DMA was used as early as 1977 by Eliott prior the GC-FID analysis [8].

He found out, that a small amount of water is necessary to catalyze the reaction. The first aim of our research was to adapt the method described by Eliott for use with GC-MS systems. However, since water degrades the sensitivity of the mass spectrometer, these reaction conditions could not be adopted directly. For this reason, the reaction was carried out in organic solvent without adding water [9]. In the course of the research, it turned out that an ester is formed in this reaction, but it only appeared as a by-product. We assume, that the water promotes the esterification reaction and the same reaction without water tends to form different main product. The structure of the main product and how it is formed were not known at the beginning of the research. Therefore, clarifying the structure of this product has become the primary objective of our work.

The formation of the PFCA derivatization products

For all mass spectrometric analyses, perfluorooctanoic acid (PFOA) was dissolved in acetonitrile or MTBE and mixed with DMF-DMA or DMF-DEA. In an optimized reaction, derivatization is performed by adding 50 µl of 0.4 M DMF-DMA solution to 200 μl PFCA solution. The sample can be injected directly into the GC system without further processing.

In the first step, GC-MS-EI analyses of two reaction mixtures were performed: PFOA with DMF-DMA and with DMF-DEA. It was observed that the same main product (peak 1 in Figure 1) is formed in both reactions. This indicates that the detected main product cannot be an ester, since DMF-DMA and DMF-DEA form different esters. An ethyl ester can be observed as a by-product (peak 2 in Figure 1). The retention time of methyl ester is too short and cannot be detected on the chromatogram. This result indicates that the methoxy or ethoxy groups from the derivatizing agents are not involved in the formation of the main product. 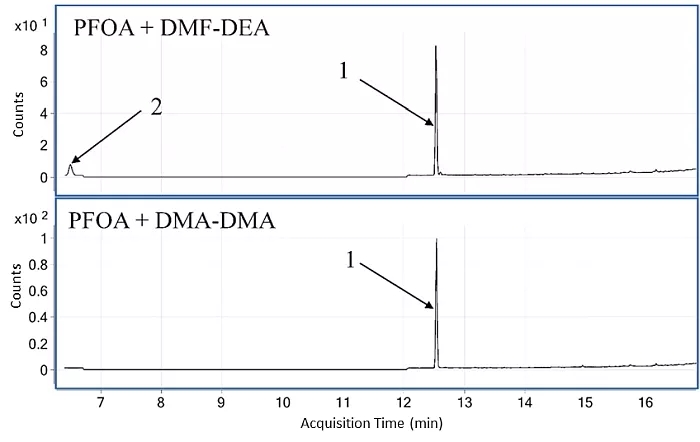 Fig.1: Chromatograms of two samples after derivatization of PFOA with DMF-DEA (top) and DMF-DMA (bottom) [1]

The spectrum of the main product showed an intensive signal at m/z 426, which intuitively could not be assigned to any logical product of the reaction (Fig.2). Next, a GC-MS-PCI analysis was performed. Besides the fragment ion at m/z 426, larger fragment ions at m/z 442 and 451 were also observed on the PCI spectrum. Based on these two spectra, it was hypothesised that the mass of the compound was 470 u. Thus, a small signal at m/z 469 in EI would correspond to a fragment [M-H]+. Fragment ion at m/z 451 in PCI spectrum could then arise from loss of 19 u, F-.

Fig. 2: The EI mass spectrum of the unknown PFOA derivatization product correlated with peak 1 in the chromatogram in Fig.1 [1]

In the next experiment, the unknown product of the reaction of PFOA with DMF-DMA was analyzed by an ESI and DART in positive and negative ion mode. The positive ESI spectrum only gave a signal at m/z 615.1812, which could not be correlated with the EI result. Similar to the ESI, the positive DART analysis also yielded only one ion at m/z 615.1801.

The negative ESI spectrum also showed a signal at very high m/z: 927.0404. The ESI and DART results led to the assumption that several cluster ions were found in the sample. Since the mass of one PFOA anion is 413 u, the cluster anion with m/z 927 could consist of two PFOA anions and one small cation with nominal mass 101 u. Following this line of thought, a cation at m/z 615 should consist of one PFOA anion (413 u) and two low-mass cations (101 u each). In this way, the structural formula [C5H13N2]+ was assigned to the cation of the cluster ion. Thus, it could be shown that the unknown main product must be a salt.

To prove this, a cation at m/z 101 should be detected in the sample. Therefore, a liquid injection field desorption/ionization (LIFDI) TOF-MS analysis was performed next. This measurement resulted in a LIFDI spectrum with a base peak at m/z 101.12, which could be assigned to the [C5H13N2]+ iminium cation. The derivatizing agent (DMF-DMA) clearly undergoes rearrangement in the presence of perfluorcarboxylic acid and forms a very stable cation which can be detected at m/z 101. An N,N,N',N'-tetramethylformamidinium salt of PFOA forms in the solution (Fig.3).

Fig.3: Formation of PFOA salt during reaction with DMF-DMA [1]

With these findings, the GC-MS-EI data could be revised to provide additional information. A salt formed from PFOA and DMF-DMA cannot be detected in this form by GC-MS. A further reaction must take place within the injection block of the GC. It can be excluded that the salt decomposes, because this reaction would release PFOA, which would be found as a broad peak. One possible reaction of this salt in the injector is decarboxylation. The phenomenon of CO2 loss from a haloacetic acid in the GC injector has been described in the literature [10, 11]. Figure 4 shows the decarboxylation in the injector and the main product of the reaction. 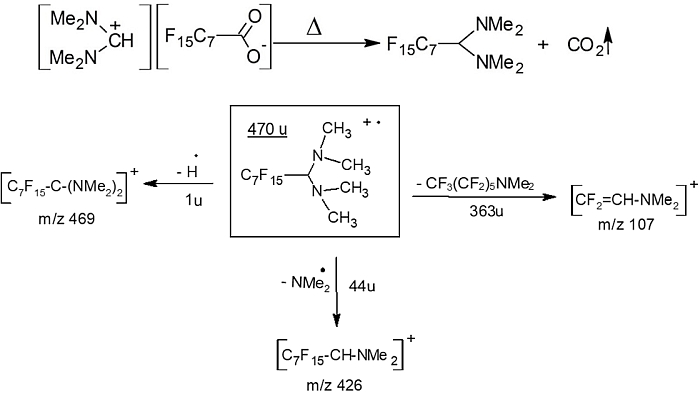 Fig. 4: The reaction of PFOA salt in the injection chamber [1] and the most important fragment ions of the main product (1-perfluorooctane-(N,N,N-tetramethyl)-diamine)

Once the reaction mechanism and product were identified, the reaction was optimized for PFCA analysis in extracts of solid samples. A short communication about this research was already published [12]. The influence of solvent, reaction time and temperature were tested. While alcohols and pyridine promote the esterification reaction, the non-polar solvents, such as hexane and MTBE, are well suited for amine formation. Moreover, after extensive research on matrix effects on the reaction, it was found that for quantification of PFCA in real samples, the standard addition method is the most suitable. The method was successfully applied for three types of samples: dental floss, textiles, and sewage sludge.

This method has the potential to be used in many laboratories for PFCA analysis. The reaction is very fast, simple and the sample preparation is done in a few steps. In addition, no special laboratory equipment is required to perform these reactions. GC-MSD is one of the simplest coupling of a gas chromatographic separation and mass spectrometric detection. This qualifies the developed methods to become a standard analytical method for PFCA in many analytical laboratories, as GC-MSD systems are less expensive and easier to use than LC-MS/MS systems.